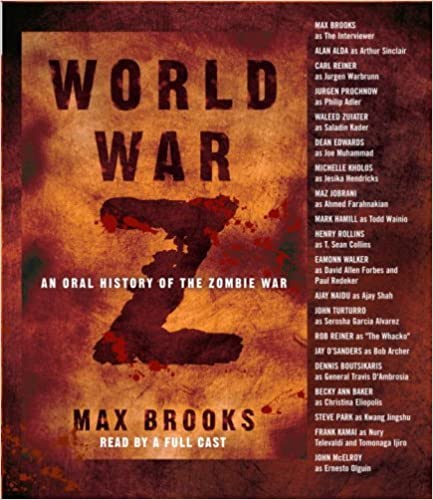 An oral history of a zombie outbreak set in the future. The story is told through a series of interviews with many different characters around the world at different points of the war. Overall, it's a story about humans vs. zombies and the strategy needed to prevail and save mankind. I recommend the audiobook version, much better than the movie.

World War Z was my first foray into the oral history genre and I liked the layout of it very much. I listened to the audiobook version, so I'm not sure how engaging it would be if you read it instead. I also listened to it as I was recovering from LASIK surgery, so I was able to binge it across a couple days.

The perspective from which it was told, through interviews with "survivors," was interesting. Though I guess I would have liked to be "in" the story a bit more during the action. Overall an engaging and relatively short listen.

I'm a big fan of all things zombies so the apocalyptic genre appeals to me. The oral history portion of it was interesting. I really liked the characters and the different actors used in the audiobook version. The different voices really made the audiobook come alive and the story feel real.

I would've liked a bit more action, but as the novel was an oral history the perspective was told from a lens into the past.

Although it was interesting to jump around to different parts of the globe, I would've liked to see a bit more character development from a shorter list of characters. I found it a bit difficult to really invest in any one character.

Someone who is into zombie stories or likes oral histories. This novel would be good for someone who is about to embark on a shorter (10-15 hour) car trip and wants a good horror movie as a companion.