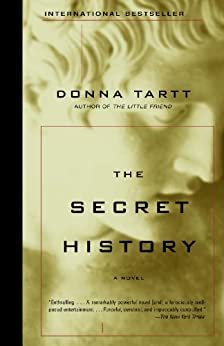 The Secret History by Donna Tartt

Tartt's The Secret History follows a group of college students studying Ancient Greek at a New England university. The protagonist, Richard, finds his way into this exclusive group and finds that the group is quite reclusive and deviates from the traditional experience of college-life.

The story centers around the group trying to find truth through beauty, which quite often means removing any traditional boundaries (legal and otherwise). The eccentric group of students are compelled by the instruction of an almost legendary professor that encourages their exploration.

Following a transformative event, the group needs to devise a plan to keep a secret from the general public.

I found "The Secret History" through a recommendation page from the New York Public Library. I had already read "The Goldfinch" by Tartt and enjoyed it so I thought I would give another Tartt novel a shot.

This felt like a long read and dragged at times, but kept me engaged just enough to continue reading. The characters are just compelling enough but not necessarily very deep or complex.

The protagonist, Richard, is a nice control as opposed to the almost over-the-top personalities of the rest of the characters.

The story arc was more compelling in "The Goldfinch" but this was still an engaging read.

If you are someone who is interested in the study of Ancient languages (Greek in particular) you would like this book.

For if the modern mind is whimsical and discursive, the classical mind is narrow, unhesitating, relentless.

I would come to find, with Julian: though he gave quite the opposite impression, of freshness and candor, it was not spontaneity but superior art which made it seem unstudied.

“Death is the mother of beauty,” said Henry. “And what is beauty?” “Terror.” “Well said,” said Julian. “Beauty is rarely soft or consolatory. Quite the contrary. Genuine beauty is always quite alarming.”

“We don’t like to admit it,” said Julian, “but the idea of losing control is one that fascinates controlled people such as ourselves more than almost anything.

“Because it is dangerous to ignore the existence of the irrational. The more cultivated a person is, the more intelligent, the more repressed, then the more he needs some method of channeling the primitive impulses he’s worked so hard to subdue. Otherwise those powerful old forces will mass and strengthen until they are violent enough to break free, more violent for the delay, often strong enough to sweep the will away entirely.

Beauty is terror. Whatever we call beautiful, we quiver before it. And what could be more terrifying and beautiful, to souls like the Greeks or our own, than to lose control completely?

If we are strong enough in our souls we can rip away the veil and look that naked, terrible beauty right in the face; let God consume us, devour us, unstring our bones. Then spit us out reborn.”

I suppose there is a certain crucial interval in everyone’s life when character is fixed forever;

Love doesn’t conquer everything. And whoever thinks it does is a fool.

“But design is preferable to chance.” Henry smoothed the crumpled map against the table with the flat of his palm. “There, you’re wrong,” he said. “If we attempt to order events too meticulously, to arrive at point X via a logical trail, it follows that the logical trail can be picked up at point X and followed back to us. Reason is always apparent to a discerning eye. But luck? It’s invisible, erratic, angelic.

“There is nothing wrong with the love of Beauty. But Beauty—unless she is wed to something more meaningful—is always superficial. It is not that your Julian chooses solely to concentrate on certain, exalted things; it is that he chooses to ignore others equally as important.”