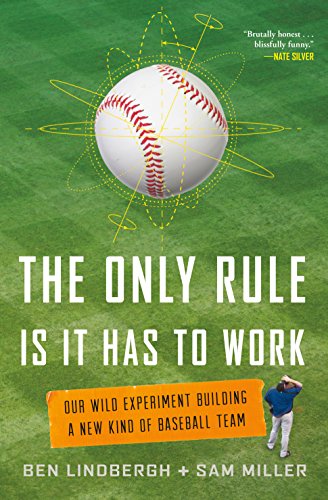 I was a bit skeptical as I picked this book up as I'm not a devotee to sabermetrics in baseball. I think it's an interesting idea but I guess deep down I was part of the "old guard" in baseball that thinks advanced analytics may be playing a bit of a heavy hand in the game. That or I just hated getting shifted as a left-handed hitter.

My initial hesitations were assuaged as I started reading though as the book is more about team dynamics and the personal stories of the characters and less about how statistics could influence the direction of the team (though there is plenty of stats to get your fix if that's what you enjoy!).

Baseball fans who are interested in how sabermetric experiments play out in the real world.

Outside of baseball fans, I think anyone who is interested in team dynamics or how to bring new ideas into an organization entrenched in old beliefs would enjoy this book.

There were no rules, except for one that our players demanded: Whatever we tried had to work.

By night, he wastes time working for us, joining a long line of supersmart people who might have cured cancer if they’d never come across a dumb game in which grown-ups hit cowskin with sticks.

being competitive means engaging in the ambiguous negotiation of the acceptable vs. the unacceptable.

If the A’s were “a collection of misfit toys,” as Michael Lewis wrote, then we’ll be building a team out of toys that got recalled because they were choke hazards.

The first rule of child psychology is that it applies throughout all of life. They will scoff at it and three days later be checking out how many stars they have.

They exist for history, and we take joy from them because we accept that they are superior at an arbitrary assortment of skills that we have collectively decided have value.

At one point in a preseason meeting with Fehlandt, when the conversation turned to the shittiness of umpires, our manager said something that stuck with me: “I try to explain, dude, this is my résumé. Put yourself in our perspective and understand how important this is. I need to see you work as hard as me.” Before we ask the players to trust us, we need them to see how hard we’re trying.

But he had also committed the cardinal sin of ballplayers: He wouldn’t shut the fuck up.

SA Note: This couldn't be more true inside of a clubhouse/team.

SA Note: I like this reference to a broken bat home run.

We were like third-party candidates whose positions could never be proven wrong, until by fluke of circumstance we accidentally got elected.

Once I started trying to win an argument, I found myself rotating every fact to suit my position. This was true of the facts that came out of my mouth and also of facts that went into my ears, which I heard only deeply enough to deflate or reposition. Conversation became an exercise in bullshit.

Its premise, based on the work of political scientists, was that the worst thing a president can do to advance his positions is to state them; as soon as he does, a huge number of people will position themselves in opposition, and they will lose the ability to be swayed by any contradictory evidence.

Dale Carnegie was way ahead of me: “If you tell them they are wrong,” he wrote, “do you make them want to agree with you? Never! For you have struck a direct blow at their intelligence, judgment, pride and self-respect. That will make them want to strike back. But it will never make them want to change their minds. If you are going to prove anything, do it so subtly that no one will feel that you are doing it.”

Because, I come to realize, losing is not only the absence of victory but also the expenditure of an opportunity for victory.

SA Note: As someone who has had 3(!) separate teams that won a title or advanced to the post-season right after my departure (HS, College, and Summer Collegiate teams), I often think about this sentiment a lot. Selfish-me says that I helped set these teams up for success, while the "glass half-empty" side of me says that I was holding them back. Like Lindbergh says, there probably isn't much truth to either.