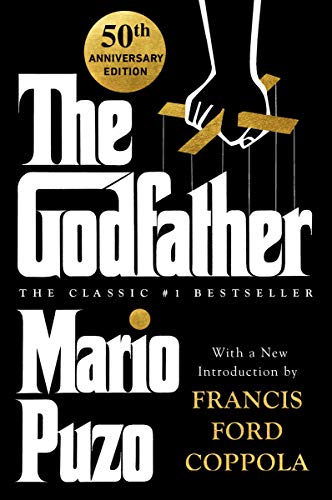 The Godfather by Mario Puzo

While renowned by actual gangsters of the time for its accurate depiction of the NYC underworld, The Godfather is a story about loyalty, psychology, and amassing power.

While I've caught bits and pieces of the movie throughout my life, I saw The Godfather on some internet list of "Greatest Works of Fiction" and thought it would be a good book to add to my reading list.

I really enjoyed The Godfather - more than I expected to, honestly. I gravitated to the story and the arc of the family, but found the motifs of how trust is gained (slowly) and lost (quickly) the most intriguing. A great entertaining read and much better than the movie.

The depiction of trust and loyalty. It was apparent throughout the book how long it takes for someone to be trusted in an organization like "The Family." Often, a Lieutenant would have to prove himself for 5-10 years to be trusted into the inner circle. But just one mistake or act of disloyalty could mean his life.

Business vs. Personal: The line blurs between what is strictly business and what could be taken as a personal slight. My personal views on what is business and what is personal (i.e., how much we take our work as representative of who we are) is ever evolving - and I really enjoyed how Puzo plays with this question throughout the story. There's no neat resolution which I believe is the same in life.

Great quotes obviously, but I found it interesting to put some sayings like "I'll make him an offer he can't refuse" or "revenge is a dish best served cold" into story context.

There's nothing that I actively disliked about the book/story, but it did ruin watching the movie for me. The book is heads and shoulders better than the movie, so I guess I dislike how I'm a cliche for saying that.

I didn't love the ending, felt abrupt, but as the saying goes, endings should happen before you are ready.

Someone who is looking for an entertaining read and enjoys dissecting loyalty, trust, and its relation to a family business. It also wouldn't hurt to not be dissuaded by some sex and violence as those are prevalent throughout the story.

📚 My Highlights and Favorite Quotes

So Don Corleone himself was not angry. He had long ago learned that society imposes insults that must be borne, comforted by the knowledge that in this world there comes a time when the most humble of men, if he keeps his eyes open, can take his revenge on the most powerful. It was this knowledge that prevented the Don from losing the humility all his friends admired in him.

“Tom, don’t let anybody kid you. It’s all personal, every bit of business. Every piece of shit every man has to eat every day of his life is personal. They call it business. OK. But it’s personal as hell. You know where I learned that from? The Don. My old man. The Godfather. If a bolt of lightning hit a friend of his the old man would take it personal. He took my going into the Marines personal. That’s what makes him great. The Great Don. He takes everything personal. Like God. He knows every feather that falls from the tail of a sparrow or however the hell it goes. Right? And you know something? Accidents don’t happen to people who take accidents as a personal insult.

It was from this experience came his oft-repeated belief that every man has but one destiny. On that night he could have paid Fanucci the tribute and have become again a grocery clerk with perhaps his own grocery store in the years to come. But destiny had decided that he was to become a Don and had brought Fanucci to him to set him on his destined path.

He was changing visibly before her eyes, hour by hour, into a man who radiated some dangerous force. He had always been quiet, speaking little, but always gentle, always reasonable, which was extraordinary in a young Sicilian male. What she was seeing was the shedding of his protective coloration of a harmless nobody now that he was ready to start on his destiny. He had started late, he was twenty-five years old, but he was to start with a flourish.

Even as a young man, Vito Corleone became known as a “man of reasonableness.” He never uttered a threat. He always used logic that proved to be irresistible. He always made certain that the other fellow got his share of profit. Nobody lost. He did this, of course, by obvious means. Like many businessmen of genius he learned that free competition was wasteful, monopoly efficient. And so he simply set about achieving that efficient monopoly.

Lawyers can steal more money with a briefcase than a thousand men with guns and masks.”

“Every man has one destiny,”