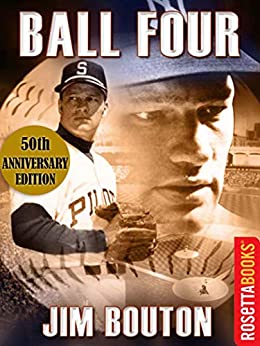 A "listicle" of the "Best Baseball Books of All-Time." As I started playing baseball again in 2021, I realized I hadn't read much about the sport and this book was apparently a "must-read" for any baseball player/fan.

Any baseball fan would enjoy this book as Bouton exposes all the good, bad, and ugly that surrounds the sport.

I can still remember Pete Rose, on the top step of the dugout screaming, “Fuck you, Shakespeare.”

I think we are all better off looking across at someone, rather than up. Sheldon Kopp, the author and psychologist, wrote, “There are no great men. If you have a hero, look again: you have diminished yourself in some way.”

He just ran into Doubleday’s First Law, which states that if you throw a fastball with insufficient speed, someone will smack it out of the park with a stick.

We agreed we’re both troubled by the stiff-minded emphasis on the flag that grips much of the country these days. A flag, after all, is still only a cloth symbol. You don’t show patriotism by showing blank-eyed love for a bit of cloth. And you can be deeply patriotic without covering your car with flag decals.

Today Joe Schultz said, “Well, boys, it’s a round ball and a round bat and you got to hit it square.”

“The world doesn’t want to hear about labor pains,” Johnny Sain used to say. “It only wants to see the baby.”

Joe Schultz is not like Sal with the pitchers. Gelnar was telling us about this great conversation he had with Joe on the mound. There were a couple of guys on and Tom Matchick was up. “Any particular way you want me to pitch him, Joe?” Gelnar said. “Nah, fuck him,” Joe Schultz said. “Give him some low smoke and we’ll go in and pound some Budweiser.”

It was the Bard or Johnny Sain or somebody who said, “He who would be calm must take on the appearance of being calm.”

They have bedsheet banners in Atlanta too. They say REBEL. Sometimes the bedsheet is a Confederate flag. I wonder how the Negro players feel about them. The worst part is that these things are hung by kids. Why the hell couldn’t they let that stuff die with their grandfathers? These are not rebels who want something new. These are rebels who want to bring back the old.

You see, you spend a good piece of your life gripping a baseball and in the end it turns out that it was the other way around all the time.

I felt I needed to get away from the noise in my head and find someplace I could breathe. The illusion was always that it would come with the next achievement, the next success. If I could just find that ultimate accomplishment I’d be safe.

we both do industrial consulting which, as a friend of ours said recently, is better than working for a living.

“life is what happens to you while you’re busy making other plans.”

Think of a ballplayer as a fifteen-year-old in a twenty-five-year-old body.

And a lifetime spent developing one skill doesn’t allow much time to develop others. Lots of athletes can’t function in the real world. That’s why they only feel comfortable in each other’s company. They sense that something is missing in their lives, but they’re not sure what. At the same time, they feel invincible because of their success on the field.

It’s just that every year in the spring I get this urge to play some ball in the sunshine. Just for fun. And, while my life is fun, I know it’s not that way for most people. There is too much poverty, too much greed, and too much ignorance in the land. As one of the lucky ones, I’d like to help make things better. That’s my dream these days.

I’m like the talking dog; it’s not that the dog speaks well, it’s that he speaks at all.